Clad in a freshly dry-cleaned suit, FTM-editor in chief Eric Smit went to visit the American ambassador to talk about the TTIP trade treaty. He came face to face with a bunch of like-minded representatives and stakeholders of major corporations. 'This is off the record!'

FTM journalists don't often get invitations by the establishment. That is why receiving a cordial invitation by the US embassy to discuss the controversial TTIP trade treaty between the United States and Europe seemed like a great opportunity. Ambassador Timothy Broas wanted to increase his understanding of how the TTIP is perceived in the Netherlands by discussing the treaty with Dutch ‘thought leaders and experts'. The trade treaty aims to eliminate the final trade impediments between the two economic powers. This will boost the economy – or so they claim.

Prior to this, I had consulted with embassy staff on the conditions of my presence at this dinner. For me, it was essential that I was allowed to report on it publicly. After all, I would be an awful journalist if I couldn't. He consented, as long as the people present wouldn't be quoted by me. People had to be able to talk freely. This seemed like an acceptable compromise. With invitation and passport in hand, and excellent weather outside I ventured out to The Hague on June 10. Dress code: business. Although I'm more comfortable going about my affairs in jeans and leather cowboy boots, it seemed more appropriate to show up fashionably late at the embassy's doorstep in a freshly dry-cleaned suit, with nicely polished shoes and no tie. In the hall of the official residence, I shook the ambassador's hand. He gave me a warm welcome, but sternly told me the following: 'Everything is off the record tonight'. 'Of course it is', ensured I him.

The invited guests came from companies and institutes such as Philips, ABN Amro and ING. Also present were: Simon Smits, the current director-general of Foreign Economic Relations for the Ministry of Foreign Affairs and Winand Quadvlieg, who is in charge of the Brussels branch of the employers' association VNO-NCW. The only other journalist/TV economist present was Mathijs Bouman of Het Financieele Dagblad. I was seated next to Willem-Jan Laan, director global affairs at Unilever. Directly infront of me sat Andy Klom, the softly spoken representative of the European Commission in the Netherlands.

Glancing down at the menu, I noticed it was lacking any traditional American delicacies. The first dish: some carrot tartare wrapped with wild smoked wild Alaskan salmon and two poached quail eggs in a cucumber gazpacho. Exquisite. A few days earlier Barack Obama had to make do with a Weisswurst and Weizenbier at the G7 meeting in the Bavarian Alps. The American president is making great efforts for the TTIP. He wants the trade treaty to be ratified within his term as president. A day after the German bar meal the G7 expressed their distinct approval: a framework agreement has to be finished in the next six months.

The optimism about TTIP was very noticeably present in some guests. It quickly became evident I was the only guest there with a critical mindset about the pending treaty. The repulsion many citizens have shown against TTIP was dismissed as being purely emotional. The resistance against the ISDS (the Investor State Dispute Settlement): completely irrational. One after the other guest told the same tale in various levels of excitement. 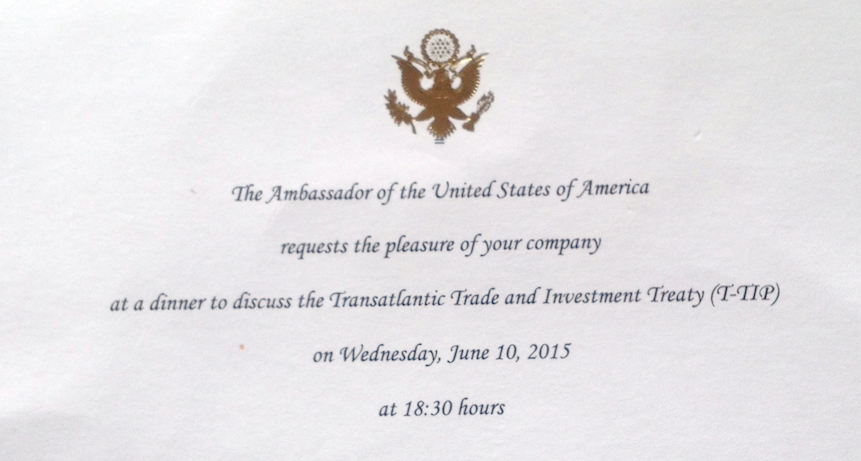 The invitation of the US ambassador

Why would Europeans, the Dutch in particular, show such resistance to a treaty that has such self-evident benefits? Why are they still calling the legal arbitration described in the ISDS shady? Critics didn't know what they were talking about. Their knowledge about these affairs was seriously lacking. Some remarked that populists were taking advantage of people's anger and their inherent distrust of Americans. The people at the table nodded and grumbled approvingly.

IF HARD EVIDENCE FOR THE FOUNDATION OF TTIP IS LACKING, WHERE IS YOUR GRANDSTANDING BASED ON?

It was high time to shake things up a little bit, without having chlorine chickens fly over the diner table. I asked the people present what their confidence was actually based on. Surely it couldn't be TTIP's massive predicted economic benefits? Economic models (Bertelsmann, Ecorys) predict that in the best case scenario Europe's GDP will grow by half a percent in the next ten years. In the worst case it will shrink by half a percent. (Capaldo). The projected outcomes cancel each other out. We just don't know, I concluded. If any hard evidence for TTIP's benefits is lacking, what is your grandstanding actually based on? My argument didn't impress. The projected numbers might not be impressive, but it was wrong for me to deny its positive influence. Eliminating trade impediments by equalizing standards and removing import taxes will increase trade. This in turn would benefit production and results in jobs. No sane man could be opposed to that.

But I was. Could they quantify the amount of trade exactly? How much did Europe actually export to the US? One billion a day, someone at the table exclaimed. Exactly, I said, as a servant presented a plate of sliced lamb steak with a puree of eggplant. And at the end of the year, that daily billion comprises one percent of the European GDP. Which companies represent that one percent? I believe it's the ones seated here today. As a result, these companies will benefit most from TTIP. But does the motor of the European economy – the middle and small business (SME) – benefit equally? They claimed that they would. The SME are in fact the biggest suppliers of major corporations and the benefits they'd enjoy would be immense.

And so it went on. I kept pointing to the lack of any proper evidence in favor of TTIP, but to no avail. I then argued that there would be a downward pressure on European labor wages. Right now these are higher than in the US. The same thing happened to Americans with the North American trade treaty NAFTA. They affirmed this, but stated that it can't be concluded that the trade treaty was the cause of this. I saw the famous Dutch TV-economist frown, but no one said anything about this economic gibberish. The subject of increasing inequality wasn’t a part of our discussion anyway. They were a little more open to the idea of replacing the controversial ISDS with an independent arbitration tribunal. But even then, such a relatively simple measure that would drastically increase the transparency of jurisdiction surrounding TTIP was met with a lot of resistance.

One of the guests proposed that success stories of companies that benefit from trade with the US should be brought forward in the media. Because that was the gist of the evening; we were there to contribute to the passing of TTIP, not to discuss the actual issues more free trade might bring. And besides; we Europeans have to, because what if the Asian variant of TTIP (TPP) is passed? Then the Asians would be able to do business with the United States without any tariffs! It was quite evident that geopolitical interests were also at play. It's imperative to stay ahead of the competition along with the Americans, by forming an economic power block. It's the only way we'll be able to enforce things in the future. Full steam ahead for TTIP, I concluded at the of the evening, as I found my way out over the highly-polished parquet. The dinner had given me an insightful look into the thought patterns of TTIP's stakeholders and those directly involved. More free market, more free market, more free market, sounds the still enchanting mantra. No doubts whatsoever. The co-operating public bodies also don't show an ounce of criticism. Doubt is non-existent in corporate circles. Changing these people's minds, will take tremendous efforts. 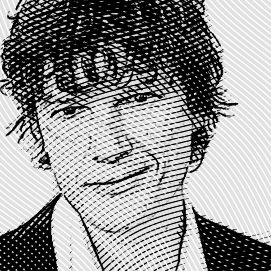