Robin Fransman addresses a critical open letter to the Greek prime minister. 'Greeks did not lose their dignity because of the Troika. They lost their dignity when they committed fraud.'

Dear Mr Tsipras, I read your letter to German Readers with great interest. It contains some encouraging points, but unfortunately, it is also a gross distortion of history and therefore avoids reflection. So instead of taking responsibility, it puts most of the blame for the Greek predicament on others. The Greek crisis began when it was revealed in 2010 that the Greek authorities had wilfully manipulated national statistics. Both the budget deficit and the debt had been understated for years. And economic growth overstated. All these figures were corrected several times, each time revealing greater debts, higher deficits and lower growth. The fraud in statistics first of all allowed the Greek government to promise pensions and salaries to Greek workers and citizens that could never have been paid, but also, after its revelation, induced an immediate inability to pay its bills, and led to a sudden stop in investment, trade and consumption.

What, I may ask you, should Europe have done under these circumstances? When even the extent of the problem was unknown? What other option was there, than to extend loans while the real statistics were being worked on? An immediate default? Do you honestly think the suffering would have been smaller if Greek banks had been bankrupted and Greek citizens and businesses would have lost all their deposits? Sure, we also saved French and German banks by extending the loans to Greece. We could have saved those directly, but that would not have alleviated the crisis in Greece nor would that have saved Greek banks from going under.

May I also remind you that Greece prosecuted the new Greek Director of Statistics in 2012 and 2013. The man who had finally made sure that Greek Statistics were trustworthy, was prosecuted for treason. And this was not done on the behest of the oligarchs, the trade unions were actively calling for his removal. That brings me to my second point. Greece’s problems of corruption and clientelism go far beyond the so called Oligarchs. Government workers, pensioners, pharmacists, doctors, truck drivers, lawyers and many other groups enjoy privileges in the form of subsidies, tax exemptions and barriers to competition. Not to mention the fact that too many Greeks dodge paying taxes all together. Of all ages, and all income groups. Greeks did not lose their dignity because of the Troika. They lost their dignity when they committed fraud. When they stopped paying their taxes. When they increased their incomes and pensions using unpayable and hidden debts. When they boosted economic growth by suckling on debt financed government teats.

Sir, you may be just as much in denial as the oligarchs themselves

Sir, you may be just as much in denial as the oligarchs themselves. It’s a slightly different type of denial but you still believe in the magic wand of government spending as a cure for the deep problems of Greek society. Today, even after the economic decline of the last 5 years, Greece’s per capita GDP is far higher that of Poland or Estonia. It’s the same as in Portugal. Do you honestly expect low income Europeans to pay for the well-being of middle- and upper class Greeks? The ones who have 140 billion euro’s in Greek banks and even more on foreign accounts? If you want to alleviate the suffering of poor Greeks, as I think you should, start a decent, affordable, good working wealth redistribution system in Greece. The Troika has implored successive Greek governments to end all uneconomic privileges in Greece. To improve tax collection. To strengthen oversight over government spending. These were delayed, and sabotaged over and over again. The current debt burden of Greece is in line with all other Eurozone member. With an interest bill of roughly 2% of GDP. Sir, end all special privileges in Greece, also those of your own voters, and Greece’s debt burden will become sustainable. Perhaps even because of a then well-deserved write off by your Eurozone friends.   Robin Fransman is the former deputy director of the Holland Financial Centre. He can be reached on Twitter: @RF_HFC Lees meer over Griekenland en de EU in het Griekenland in Europa dossier van Follow The Money 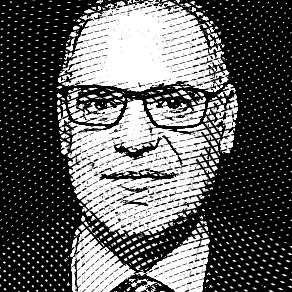 Guest 31 januari 2015 11:44
"Robin Fransman is trying to protect with disinformation"

I get the impression he is 'on a mission'. Do you?

Guest 27 april 2015 19:23
Not true. Greece has not had a balanced budget since 1974, and indeed Andreas Papandreou inflated the deficit, and thus the debt, to expand welfare and also a 'jobs for the boys' programme (also known as 'buying votes'). Greece never had a tax base to be able to support all this nonsense. Greece cannot today even pay the wages and pensions because Greeks are not paying their taxes. If it wasn't all so tragic the actions of these fools in Athens would be laughable.

Bob Lagaaij 31 januari 2015 8:40
"Robin Frenchman"...
Alexis Tsipras:"Is he French?"
"No , he's Dutch"
Alexis Tsipras:"????"
"The Dutch have cancelled áll psychiatric care,so now áll mentally ill take their rightfully place on áll (media-) platforms"
Alexis Tsipras:"We don't have psychiatric care either here : they all became bankers and politicians ! ".
"The same happened over here... but now a clever one (TUDelft) took over the Dutch National Broadcasting system"
Alexis Tsipras:"We were forced to close ours down : now all Greek watch Fox on satellite".
"What's the solution ?"
Alexis Tsipras:"We decided to turn Greek society into a real time Tarantino-movie"
"That's a great idea !
Maybe we Dutch could make Quentin from the Harrie Mulisch book/movie "the discovery of heaven" the New Dutch Prime Minister ... "
Alexis Tsipras:"We Greek always say : In the end,the people always win ! "
"You must be hallucinating on Ouzo ?"


DO NOT TRUST THE ECONOMIST.

31 januari 2015 8:49
I fully agree with Robin Fransman. Members of the eurozone are supposed to be responsible and reliable. The Greeks did not live up to these requirements and now have to pay the price for years of reckless behaviour. The new government speaks of a loss of dignity and I can understand that it is very unpleasant for a proud nation to have to eat humble pie. But what dignity is there in expecting your parents to pay off your credit card debts after a few years of irresponsible spending. It is the dignity of a spoilt child, who blames the credit card company for his debts.
If the Greeks want to earn the status of a reliable eurozone country, they will have to earn it. That is the only way to regain dignity and respect. My heart is bleeding for the average Greek, but at the same time I am shocked that ones again they have elected a government that is looking for an easy way out. That is exactly the mentality that got them into their current predicament.

31 januari 2015 9:09
"Do you honestly expect low income Europeans to pay for the well-being of middle- and upper class Greeks? The ones who have 140 billion euro’s in Greek banks and even more on foreign accounts? If you want to alleviate the suffering of poor Greeks, as I think you should, start a decent, affordable, good working wealth redistribution system in Greece." Komt deze passage uit de koker van degene die zegt dat Piketty het niet begrijpt?

31 januari 2015 15:00
If fraud bothers the author so much he might look to his own house first before casting stones at Greeks. Libor & euribor, FX, various commodities markets have been, and probably still are, rigged. Not to mention the most successful con-men of all, US mortgage lenders and their Wall Street backers. Which, by the way, hasn't been addressed by Congress, regulators or prosecutors either. (Some of us are working on that.)

And if you really want to cast stones over fraud and corruption, there's always London, home of the financial buccaneer.. So please, spare everyone your righteous indignation over fraud in Greece. Athens is no worse than Washington and London, and probably Amsterdam. I don't know, but that would be my operating assumption going in. Having helped get 4 companies off the ground, I know how "businessmen" operate.

As for propping up middle class Greeks, Just do it. How many doctors turning to prostitution do you need before you recognize there's a crisis? A youth employment rate of 50% isn't a warning sign, it's a catastrophe, crafted in Brussels. But it's hardly a disaster for everyone. The exporting economies across the northern seaboard are making hay as long as the euro remains weakened and this certainly factors into the calculations about what to do with Greece and Spain. And let's make one thing perfectly clear here. Greece isn't being bailed out. It's creditors are being bailed out. Your financial system is being bailed out and you are being bailed out. Very much like Merrill Lynch was rescued by Washington by the Mexican bailout of 1994.

Finally, the periphery was always a potential problem of monetary union. This was well known and much discussed when the proposal was originally debated, but you went ahead and did it anyways. You made your own bed, now you've got to sleep in it.

31 januari 2015 19:18
"What, I may ask you, should Europe have done under these circumstances? When even the extent of the problem was unknown?"